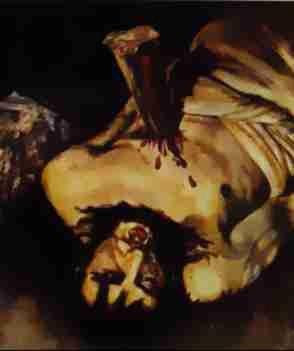 Upon discovery, a vampire can be destroyed by cremation, decapitation, exposure to sunlight or impalation with a stake through its heart. The vampire’s powers are many and varied. They can remain undead indefinitely unless exorcised in a specific manner. They can assume animal shapes and some have been thought to control the elements locally. Metamorphosis into mist is not unknown either. They can intrude upon sleeping persons’ dreams and mesmerise their prey. Their infectious bite may eventually result in the death of their victims, some of whom will likewise become undead upon expiry. Vampires, despite their manifold supernatural abilities, are nevertheless not invulnerable. They leave the confines of where the corporeal shell resides only between sunset and sunrise. They cannot cross running water save at the slack or the flood of the tide. They fear and shrink from the sign of the cross, the crucifix and, above all, from the Host, the Body of God. Holy water will burn them as some scorching acid and they flee from the fragrance of most incense, particularly frankincense. Certain trees and herbs are hateful to them, especially whitethorn, or buckthorn. They are also curiously allergic to garlic. The pungent herb Allium Sativum (wild variety: Allium Vineal) is deemed by many to be effective as a vampire repellent. In 450 BC, Herodotus, the Greek historian, in Euterpe: Concerning the History of Europe, remarks about an inscription inside the Cheops pyramid at Gisa, built circa 2900 BC, that attests to the value of garlic’s arcane properties. It was invariably employed to ward off evil spirits, and still is.

Exorcism does not "kill" the demonic agent. It rids the supernatural predatory wraith from our sphere or dimension. The corporeal host obviously returns to its true state and is no longer plagued by the apparent supernatural ability to manifest as though it were living. During the exorcism the material shell returns to earthly time as the demonic entity is expelled.

Evil tends to need to be invited when it enters a portal into our hemisphere. This does not necessarily require a full-blown evocation, or the raising of demons per se. It is relatively easy to release evil into the world for evil is not merely a lack of something, but an effective agent, a living spiritual being, perverted and perverting; a terrible reality: mysterious and frightening. The problem arises when attempting to cast such evil out of our world. This is significantly more difficult than inviting it in.

When disinterred the abnormal condition of the corpse will be a sure mark of whether it is a vampire or not. Such bodies do not suffer decomposition after burial. They do not fall to dust. Generally described as being exceedingly gaunt and lean with a hideous countenance, the vampire, when he has satiated his lust for warm human blood, will appear horribly puffed and bloated, as though he were some filthy leech, gorged and replete to bursting. The lips are often markedly full and drawn back to reveal sharp teeth, gleaming white against a frame stained with slab gouts of blood. The foul offal from the previous night's feast. The gaping mouth, stained and foul with blood, might reveal glutinous trickles that have spilled on to the lawn shrouding and linen cerements. The form is therefore discovered gorged and stinking with the life-force blood of others. The eyes are sometimes closed; more frequently open, glazed, fixed, and glaring fiercely. The corpse will nevertheless seem composed as if in a profound sleep. The stench of the charnel where these undead repose is oftentimes so terrible and fetid that the sickening odour can effect the senses of an observer for possibly months afterwards. Epidemics of this unspeakable evil have resulted in entire graves being discovered soaked and saturated with squelching blood. Such an epidemic plagued south east Europe and reached England's shores in the early part of the 18th century. It is believed that the Highgate contamination had its origins in this particular plague.