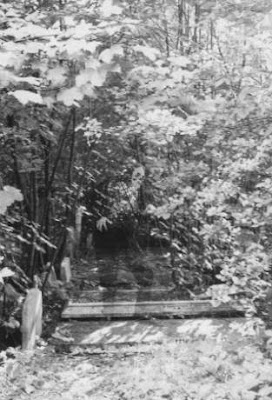 Andrew Lang in his Dreams and Ghosts (1897), relates the story of "The Ghost that Bit," which might seem to have been a vampire, but which actually cannot be so classed since vampires have a body and their craving for blood is to obtain sustenance for their body.

[Seán Manchester argues that vampires possess the power of metamorphosis, ie shapeshifting; therefore no dichotomy exists in their apparent ability to manifest from corporeal to non-corporeal and back again.]

The narrative is originally to be found in Notes and Queries, 3rd September 1864, and the correspondent asserts that he took it "almost verbatim from the lips of the lady" concerned, a person of tried veracity. Emma S------ was asleep one morning in her room at a large house near Cannock Chase. It was a fine August day in 1840, but although she had bidden her maid call her at an early hour she was surprised to hear a sharp knocking upon her door about 3.30. In spite of her answer the taps continued, and suddenly the curtains of her bed were slightly drawn, when to her amazement she saw the face of an aunt by marriage looking through upon her. Half unconsciously she threw out her hand, and immediately one of her thumbs was sensibly pressed by the teeth of the apparition. Forthwith she arose, dressed, and went downstairs, where not a creature was stirring. Her father upon coming down rallied her a little upon being about at cockcrow and inquired the cause. When she informed him he determined that later in the day he would pay a visit to his sister-in-law who dwelt at no great distance. This he did, only to discover that she had unexpectedly died at about 3.30 that morning. She had not been in any way ailing, and the shook was fearfully sudden. On one of the thumbs of the corpse was found a mark as if it had been bitten in the last agony.

In The Proceedings of the National Laboratory of Psychical Research, Vol. I., 1927, will be found an account of the phenomena connected with Eleonore Zügun, a young Rumanian peasant girl, who in the autumn of 1926, when only thirteen years old was brought to London by the Countess Wassilko-Serecki, in order that the manifestations might be investigated at "The National Laboratory of Psychical Research," Queensberry Place, South Kensington. The child was said to be persecuted by some invisible force or agent, which she knew as Dracu, Anglice the Devil. There were many extraordinary happenings and she was continually being scratched and bitten by this unseen intelligence. It must suffice to give but two or three instances of the very many "biting phenomena." On the afternoon of Monday, 4 October 1926, Captain Neil Gow an investigator in his report, notes:

"3.20. Eleonore cried out. Showed marks on back of left hand like teeth-marks which afterwards developed into deep weals. . . . 4.12. Eleonore was just raising a cup of tea to her lips, but suddenly gave a cry and put the cup down hastily: there was a mark on her right hand similar to that caused by a bite. Both rows of teeth were indicated."

Of the same incident, Mr. Clapham Palmer, an investigator who was also present writes:

"Eleonore was in the act of raising the cup to her lips when she suddenly gave a little cry of pain, put down her cup and rolled up her sleeve. On her forearm I then saw what appeared to be the marks of teeth indented deeply in the flesh, as if she or someone had fiercely bitten her arm. The marks turned from red to white and finally took the form of white raised weals. They gradually faded but were still noticeable after an hour or so."

Such bitings not infrequent occurred, and photographs have been taken of the marks.

It was an interesting question to discuss the cause of these indentations and no doubt it is sufficiently remarkable, but however that may be such inquiry were impertinent here, for it is clearly not vampirism, nor indeed cognate thereto. The object of the vampire is to suck blood, and in these cases if blood was ever drawn it was more in the nature of a scratch or slight dental puncture, there was no effusion. Again the agent who inflicted these bites was not sufficiently material to be visible, at any rate he was able to remain unseen. The true vampire is corporeal.

The vampire has a body, and it is his own body. He is neither dead nor alive; but living in death. He is an abnormality; the androgyne in the phantom world; a pariah among the fiends.