The case of Peter Plogojowitz 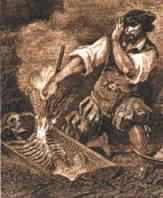 Peter Plogojowitz (Serbian form: Petar Blagojević/Петар Благојевић) was a Serbian peasant believed to have become a vampire after his death and to have killed nine of his fellow villagers. The case was described in the report of Imperial Provisor Frombald, an official of the Austrian administration, who witnessed the exorcism via impalation by stake of Plogojowitz.

Peter Plogojowitz lived in a village named Kisilova (Kisiljevo) in the part of Serbia that temporarily passed from Ottoman into Austrian hands after the Treaty of Passarowitz (1718) and was ceded back to the Ottomans with the Treaty of Belgrade (1739).

Plogojowitz died in 1725. His death was followed by a spate of other sudden deaths (after very short maladies of about twenty-four hours each). Within eight days, nine persons perished. On their death-beds the victims allegedly claimed to have been throttled by Plogojowitz at night. Plogojowitz's wife stated that he had visited her and asked her for his opanci (shoes). She then proceeded to move to another village. In other accounts it is said that Plogojowitz came back to his house demanding food from his son, and when the son refused Plogojowitz brutally murdered his own son.

The villagers decided to disinter the body and examine it for signs of vampirism; such as growing hair, beard, and nails and absence of decomposition.

The inhabitants of Kisilova demanded that Kameralprovisor Frombald, along with the local priest, should be present at the procedure as a representative of the administration. Frombald tried to convince them that consent from the Austrian authorities in Belgrade should be sought first. The locals declined because they feared that by the time the permission arrived the whole community could be exterminated by the vampire, which they claimed had already happened "in Turkish times," ie when the village was still in the Ottoman-controlled part of Serbia. They demanded that Frombald himself should immediately permit the procedure or else they would abandon the village to save their lives. Frombald was obliged to consent.

Together with the Gradiška priest, he viewed the already exhumed body and was astonished to find that the characteristics associated with vampires were indeed present. The body was undecomposed, the hair and beard were grown, there were "new skin and nails" (while the old ones had peeled away), and blood could be seen in the mouth. After that, the people, who "grew more outraged than distressed," proceeded to stake the body through the heart, which caused a great amount of "completely fresh" blood to flow through the ears and mouth of the corpse. Finally, the body was burned.

Frombald concludes his report on the case with the request that, in case these actions were found to be wrong, he should not be blamed for them, as the villagers were "beside themselves with fear." The authorities apparently did not consider it necessary to take any measures regarding the incident.

The report on this event was among the earliest documented testimonies concerning vampirism in Eastern Europe. It was published by Wienerisches Diarium, a Viennese newspaper, today known as Die Wiener Zeitung. Along with the report of the very similar Arnold Paole case of 1726-1732, it was widely translated West and North, contributing to the vampire panic of the eighteenth century in Germany, France and England.

In De masticatione mortuorum in tumulis (1725), Michaël Ranft attempted to explain folk beliefs in vampires. He writes that, in the event of the death of every villager, some other person or people—most likely a person related to the first dead—who saw or touched the corpse, would eventually die either of some disease related to exposure to the corpse or of a frenetic delirium caused by the panic of merely seeing the corpse. These dying people would say that the dead man had appeared to them and tortured them in many ways. The other people in the village would exhume the corpse to see what it had been doing. He gives the following explanation when talking about the case of Peter Plogojowitz:

"This brave man perished by a sudden or violent death. This death, whatever it is, can provoke in the survivors the visions they had after his death. Sudden death gives rise to inquietude in the familiar circle. Inquietude has sorrow as a companion. Sorrow brings melancholy. Melancholy engenders restless nights and tormenting dreams. These dreams enfeeble body and spirit until illness overcomes and, eventually, death."

Recently, the story has sparked some interest in the village of Kisiljevo among some Serbian journalists. According to Belgrade newspaper Glas javnosti, which cites local official Bogičić, the villagers are unable to identify Plogojovitz's (Blagojević's) grave and don't know whether the local family that bears that surname is related to him. One local does recall stories of a certain female vampire by the name of Ruža Vlajna, who was believed to haunt the village in more recent times, in the lifetime of her grandfather. She would make her presence felt by hitting pots hanging from roofs and was seen walking on the surface of the Danube, but it is unknown whether she was ever staked.