Those who are not Vampires 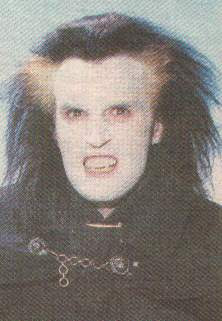 If people who incorrectly call themselves "vampires" would consult the definition provided in the English dictionary we would be able to communicate much better. Such individuals are what vampirologists like myself describe as vampiroids and psychologists sometimes refer to as people suffering from a form of personality disorder, but they are not "vampires." The only persons they are deluding are themselves and a handful of similarly reluctant dictionary users. If we do not agree on the definition and meaning of words what is the point in communicating at all? Words sometimes have quite specific meanings. "Vampire" is one such word. A small number of people choosing to hijack that word and alter its meaning to apply it, albeit absurdly, to themselves does not, in fact, change the meaning of the word. The vampire has been defined down the ages as an accursed body which cannot rest in the kindly earth, but nightly leaves its grave to prey on sleeping men and women through whom they are believed to maintain a semblance of life by sucking thence the warm blood of such victims while they sleep. Webster’s International Dictionary confirms that the vampire is a “re-animated body of a dead person … believed to come from the grave and wander about by night sucking the blood of persons asleep causing death.” The Oxford Dictionary agrees with all the above, describing the vampire as “a ghost that leaves his grave at night and sucks the blood of sleeping persons.”
Dictionaries have not accommodated the relatively recent appearance of vampiroids by expanding the word to mean "people who follow what they believe to be 'vampire' lifestyles and behaviour patterns." The word "vampire" still means what is has always meant in dictionairies. To qualify such people would have to be "undead" and they clearly do not qualify in that department. So call themselves what they will, they are not, nor ever have been, vampires; no matter how much they might wish to imagine otherwise. They are, at best, imitating what they construe vampires to be, albeit a million miles from the reality according to its accepted meaning in the English language. Once we lose the meaning of words, we might as well all act as if we are illiterate.
The interest in vampirism with an attendant growth of a vampiroid subculture over the last quarter of a century is largely due to the promotion of occultism and the malign supernatural throughout the media, particularly the cinematic and television media. The vampire archetype is the antithesis of the Christian archetype, but has more and more been portrayed in a kinder and more sympathetic light. This is at odds with reality and all we know about such predatory wraiths.The Buffy the Vampire Slayer television series and Anne Rice novels have been extremely popular, but they are light years removed from the real thing.
My disapproval is not of folk who wish to enjoy Gothic literature, art, and theatre - even when this involves their entering into the spirit of the occasion by donning what they construe to be authentic garb. My disapproval hinges on those who by their behaviour do harm to themselves and to others. Such as these I identify in my concise vampirological guide The Vampire Hunter's Handbook. Examples of ultra-vampiroids would be the cases of Manuel and Daniel Ruda in Germany, and Roderick Ferrell in the USA. Ultra-vampiroidism is no freak display of neo-Gothicism or decadent and dark Romanticism. In essence it is indubitably anti-Gothic and anti-Romantic. Such people who claim to be "vampires" are, of course, not vampires.
Those who appear to display a blood-drinking addiction, special need or habit, fetish or predilection describe themselves as "sanguinarians". Those who claim to have an ability or special need to absorb earth energies call themselves "psi-vampyres." The added trimmings of pseudo-gothic subculture and the occult are tenuous and remotely secondary. In fact, they are superficial. Vampiroidism is fiction and fantasy in relation to real vampirism. The practice of drinking human blood has nothing to do with the meaning of "Gothic," whether literature, art or achitecture. Anyone can absorb energies. There is pranic energy in mere water alone, but energy is nothing without direction and control. Vampiroidic "vampires" are a self-labelled fetishistic subculture of people, some of whom have a pathological fixation for drinking blood. Hybrid "psi-vampyres" are equally fraudulent compared to the real thing which is essentially demonic. The self-styled descriptive label "vampire" is in the case of such people a preposterous misnomer.
Source:
Seán Manchester
Posted by Vampirologist at 01:52