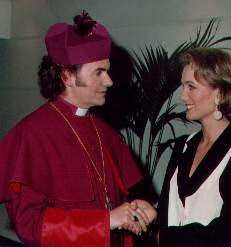 Seán Manchester was born near Sherwood Forest, Nottinghamshire, England, toward the end of a nightmare that reduced much of Europe to a wasteland. An only child, he played in the avenues of sombre forest trees in Lord Byron’s gloomy abode, Newstead Abbey Park, where the fading twilight coupled with the moan in leafy woods to herald the last tangible breath of the Romantic Movement. The influence of his parents is touched upon in his memoir: "My father introduced me to Edgar Allan Poe, and my mother introduced me to St Teresa of Avila and, later on, to St Thérèse of Lisieux."

His beloved mother was born at the end of the Great War and it is via this side of the family that the Byron connection is inherited. The sanctuary of Newstead was forsaken by his parents for Canada when he was still an infant, but they soon returned to the familiar landscape and trees through which could be glimpsed a mist-laden semi-ruin of a rich and rare mixed Gothic.

"My mother had much older memories [than Newstead]. When she was very young and her parents had moved from Derbyshire to an idyllic setting at Wollaton, a brook ran along the bottom of the country lane where their house was situated. She often spoke about her first home. Newstead, in many ways, would magnify its joys and aspects ― adding acres of woodland and more besides. After the Newstead property and its acreage were sold in the early 1960s, my grandparents lived out their remaining days in a house built for them on land purchased at Wollatan Park. The haunting of their home by a cold presence that apparently manifested as a spectre, allegedly causing my grandmother to fall down the rockery one evening, precipitated this final move. She lay undiscovered for some hours before her husband returned. Presentiments of doom and disaster seemed to intrude her everyday existence thereafter and she never properly recovered. Newstead was to become for me a symbol of all that belonged to the old world that was already irrevocably, moment by moment, slipping away. More than anything my mother wanted me to find the fulfilment that she had been denied. This is reflected in the lines I would write in a novel published some eight years after her death. 'The world we once inhabited has gone. … This is your time and your world.' So tells Mina Harker to her son, Quincey, in Carmel, my sequel to Bram Stoker’s gothic masterpiece. Yet it could have been my own mother speaking. Her world was fast disappearing as two catastrophic wars heralded the quick demise of a cultural identity and spiritual destiny that had lasted two millennia."

Already we begin to discover what set him on a road apart from others and how his interest in the supernatural was sparked. The incident at Newstead with its "presentiments of doom" involved a spectre about which he writes in Mad, Bad and Dangerous to Know (1992) and The Highgate Vampire (1991).

London also beckoned and here he would arrive to conclude his studies and live for much of his life. Author, lecturer and researcher, Seán Manchester also inherited his parents’ love of music and from early on in his life performed on reed and keyboard instruments. Later he turned to composing. He would bemoan the passing of the places, people and values of yesterday and indicate partly why he was attracted to the priesthood:

"All those wonderful qualities that made Great Britain attractive to the rest of the world would now seem to have been sacrificed to meet what is invariably the lowest common denominator. This constant lowering of standards to appease liberal modernists leaves a radical traditionalist like myself in the wilderness on most matters. Though I am not a voice entirely unheard. Not yet. ... My calling to the priesthood and episcopacy alienated a small number of so-called 'admirers' who reacted with hostility, even malice; but for me it was unavoidable in the morally bankrupt times I found myself. Degenerate behaviour and its attendant drug dependency, still in its infancy in the 1960s, has now become endemic throughout all strata of society. Absent is any political or even mainstream church leadership with the courage to address this continuing slide by returning to traditional spiritual values."

It was in 1973 that he entered the minor order of exorcist, having been tonsured, and already holding the orders of porter and reader. Later in 1973, he entered the highest of the minor orders, that of the acolyte. This was also the year when he inaugurated the founding of Ordo Sancti Graal on Good Friday 13th April:

"On Good Friday 1973, along with eleven others, I founded Ordo Sancti Graal on the summit of Parliament Hill, at London’s Hampstead Heath. After three months of spontaneous organisation, we developed into a dispersed Order of disciples of the Lord Jesus Christ. By this point I was in minor orders with Ecclesia Vetusta Catholica, an autocephalous branch of the Body of Christ that seceded from the Roman Catholic Church on 15 October 1724 with the consecration of Cornelius Steehoven as the Archbishop of Utrecht. The succession reached these shores on 8 April 1908 with the consecration of Arnold Harris Mathew as the Regionary Old Catholic Bishop for Great Britain and Ireland. Seventeen years [after the founding of Ordo Sancti Graal], I would take holy orders within Ecclesia Vetusta Catholica. In the interim ― notwithstanding pilgrimages, processions, preaching, healing and exorcisms ― I embarked on a number of quests."

On taking holy orders he inherited ecumenical lines of apostolic succession in the Old Catholic, Eastern Catholic and Eastern Orthodox Churches, plus other mainstream denominations. The following year he was elevated to the episcopate on the feast of St Francis of Assisi, 4 October 1991, whereupon he assumed primacy of the autocephalous jurisdiction Ecclesia Apostolica Jesu Christi. On the feast of the Precious Blood, 1 July 1993, he was enthroned as the Bishop of Glastonbury, and on the same feast day nine years later he founded the Sacerdotal Society of the Precious Blood, having been elected presiding bishop for the British Old Catholic Church, an umbrella movement for traditional Old Catholic groups based in the United Kingdom.

"When the precious mitre was placed upon my head on the feast of St Francis of Assisi in 1991, I already understood that a crown of thorns was contained within."

His personal view of the supernatural would be recounted as follows:

"Sightings of people who are mistaken for stray ghosts are probably few and far between because the circumstances that make such apparent hauntings possible seem to require precision not easily comprehensible to us. This does not rule out the genuinely supernatural manifestation of either angelic or demonic origin, as my late colleague Professor Devendra Prasad Varma would have been quick to point out ― and as I would have been equally quick to agree."

Seán Manchester's television debut was on 13 March 1970 on a programme about vampires in connection with Highgate Cemetery. This remains the topic he is most widely associated with by successive generations depite his obvious weariness in repeating old cases. He subsequently made hundreds of radio and television transmissions, having contributed to innumerable documentaries (some of which are available on DVD). He is consulted on matters of demonolatry and exorcism by clergy and scholars, as well as by the broadcast media. In recent times he has appeared repeatedly on the Discovery Channel, National Geographic Channel and various UK television channels. Stock footage of him regularly crops up in film documentaries about demons and vampires. He is regarded by many as the foremost authority.

His predecessor, connected to him via his close colleague Peter Underwood (author and president of the Ghost Club Society, who met and knew Montague Summers personally) would have been proud.

From Satan To Christ: Secrets of Witchcraft and Satanism Revealed in a Story of Salvation (1988); The Highgate Vampire: The Infernal World of the Undead Unearthed at London’s Highgate Cemetery (1985, 1991); Mad, Bad and Dangerous to Know: The Life of Lady Caroline Lamb (1992); The Grail Church: Its Ancient Tradition and Renewed Flowering (1995); The Vampire Hunter’s Handbook: A Concise Vampirological Guide (1997); Carmel: A Vampire Tale (2000); Stray Ghosts: A Memoir of Shades (2003); Confronting the Devil: At the Periphery and Beyond the Highgate Vampire (2007).