The haunting of Elizabeth Wojdyla 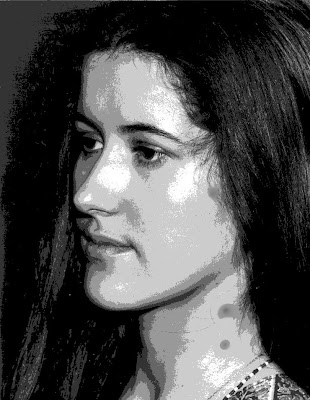 Elizabeth Wojdyla and Barbara Moriarty, two sixteen-year-old students of La Sainte Union Convent (near Highgate, London), were walking home late at night after visiting friends in Highgate Village. Their journey took them down Swains Lane which intersects Highgate Cemetery, a Victorian graveyard in two halves on a steep hill. These intelligent students could not believe their eyes as they passed the cemetery's north gate at the beginning of their downward path between the two graveyards. For there before them, amongst the jutting tombstones and stone vaults, the dead seemed to be emerging from their graves.

The two schoolgirls walked in eerie silence until they reached the bottom of the lane. Here they spoke for the first time, having finally found their voice, and confirmed they had both experienced the same terrifying scene. So frightening was it that Barbara Moriarty would not talk about it again.

Elizabeth Wojdyla, however, gave Seán Manchester an account of her experience some months later. It was tape-recorded by him and was heard during a televised film documentary about the Highgate Vampire case (True Horror: Vampires).

Elizabeth recounted: "We both saw this scene of graves directly in front of us. And the graves were opening up; and the people were rising. We were not conscious of walking down the lane. We were only conscious of this graveyard scene."

A series of nightmares then began to plague Elizabeth; all with one thing in common: something was trying to enter her bedroom window at night. A deathly-pale face identical to the corpses leaving their graves appeared behind the glass pane on some occasions.

During the summer of 1969, Seán Manchester had a chance meeting with Elizabeth Wojdyla who now appeared anaemic and listless. She was nevertheless anxious to get something off her chest. Now resident in an area not too far from the cemetery, she told Seán Manchester that her nightmares had returned with a vengeance. This time she was able to give a better description of the unwelcome spectre that haunted her nights, and, once again, Seán Manchester tape-recorded her words:

"[It has] the face of a wild animal with glaring eyes and sharp teeth, but it is a man with the expression of an animal. The face is gaunt and grey."

"[Her] condition has grown worse. ... She is withering away at such a rate that she is only just barely alive. ... She is being overcome by something."

This time Seán Manchester noted the discovery on Elizabeth's neck marks which Keith had already mentioned in his preamble:

"I noticed for the first time the marks on the side of her neck. ... They were two inflamed mounds on the skin, the centre of each bearing a tiny hole."

On another occasion it was found that specks of blood had appeared on Elizabeth's pillow. Seán Manchester at this point began to apply traditional vampire antidotes and repellents; especially when it was confirmed that she was more and more attracted to Highgate Cemetery and that her anaemic condition was worsening. The small cross she had always worn as a schoolgirl had been absent for some time. Seán Manchester provided a larger crucifix made of silver and sprinkled her environment liberally with holy water. He repeated the Creed in a loud voice, applied salt, garlic and more crosses; during which procedure prayers were recited to shield Elizabeth from the innumerable crafts of Satan and all pestilence.

Elizabeth attempted to remove the impediments and further demonic assaults occurred as nightmare incidents multiplied before this feverish struggle against the predatory vampire ceased altogether.

Her appetite restored and the unhealthy, anaemic condition vanished. The punctures on her neck, bathed with holy water throughout the conflict, eventually faded. By Christmas all was well and the hideous manifestation of the Highgate Cemetery vampire did not return to haunt Elizabeth again. Soon afterwards she relocated elsewhere.