The case of Mercy Brown 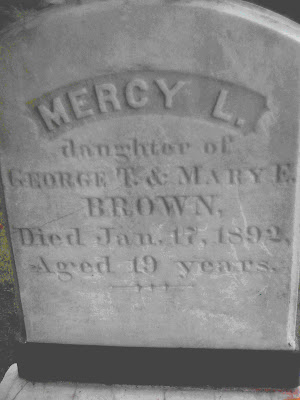 The Mercy Brown vampire case, which occurred in 1892, is one of the best documented cases of the exhumation of a corpse in order to perform rituals to banish an undead manifestation.

In Exeter, Rhode Island, the family of George and Mary Brown suffered a sequence of tuberculosis infections in the final two decades of the nineteenth century. Tuberculosis was called "consumption" at the time and was a devastating and much-feared disease.

The mother, Mary, was the first to die of the disease, followed in 1888 by their eldest daughter, Mary Olive. Two years later, in 1890, their son, Edwin, also became sick.

In 1891, another daughter, Mercy, contracted the disease and died in January 1892. She was buried in the cemetery of the Baptist Church in Exeter.

Friends and neighbours of the family were convinced that one of the dead family members was a vampire (although they did not use that term) and was causing Edwin's illness. This was in accordance with threads of contemporary folklore linking multiple deaths in one family to undead activity. Consumption was a poorly understood condition at the time.

George Brown was persuaded to exhume the bodies, which he did with the help of several villagers on 17 March 1892. While the bodies of both Mary and Mary Olive had undergone significant decomposition over the intervening years, the more recently buried body of Mercy was still relatively unchanged and had blood in the heart. This was taken as a sign that the teenager was undead and the agent of young Edwin's condition.

Mercy's heart was removed from her body, burnt, and the remnants mixed with water and given to the sick Edwin to drink.

Unfortunately, despite all his efforts, George was unsuccessful in protecting his son, who died two months later.

Dr Michael Bell is a folklorist and author of Food for the Dead (a book that explores the folklore and history behind Mercy Brown as well as several other cases of New England vampires). Dr Bell feels there is a direct connection between some vampire cases and consumption. He said: "The way you look personally is the way vampires have always been portrayed in folklore ~ like walking corpses, which is what you are, at least in the later stages of consumption. Skin and bones, fingernails are long and curved, you look like the vampire from Nosferatu."

Consumption took its first victim within the Brown family in December of 1883 when Mercy's mother, Mary Brown, died of the disease. Seven months later, the Browns' eldest daughter, Mary Olive, also died of consumption. The Browns' only son, Edwin, came down with consumption a few years after Mary Olive's death and was sent to live in the arid climate of Colorado to try and stop the disease. Late in 1891, Edwin returned home to Exeter because the disease was progressing ~ he essentially came home to die. Mercy's battle with consumption was considerably shorter than her brother's. Mercy had the "galloping" variety of consumption ~ her battle with the disease lasted only a few months. Mercy was laid to rest in Chestnut Hill Cemetery behind the Baptist church on Victory Highway.

After Mercy's funeral, her brother Edwin's condition worsened rapidly, and their father, George Brown, grew more frantic. Mr Brown had lost his wife and two of his daughters, and now he was about to lose his only son. Science and medicine had no answers for George Brown, but folklore did. For centuries prior to Mercy Brown there have been vampires. The practice of exorcising these undead began in Europe. Various ways people dealt with vampires was to exhume the body of the suspect, drive a stake through the heart, rearrange the skeletal remains, remove vital organs, or cremate the entire corpse.

So much death had plagued the Brown family that George Brown probably felt he was cursed in some way. It did not take a massive leap of faith for someone to come up with a radical idea to halt the death. Maybe the Brown family was under vampire attacks from beyond the grave? Was Mercy Brown the vampire, or was it Mercy's mother or sister? George Brown was willing to dig up the body of his recently deceased daughter, remove her heart, burn it, and feed the ashes to his son because he felt he had no other choice.

In Dr Bell's book Food for the Dead he recounts an extensive interview he conducted with Everett Peck, a descendent of Mercy Brown and life-long resident of Exeter, Rhode Island.

"Everett heard the story from people who had been there [at the exhumation of Mercy Brown] ~ who were alive at the time," Dr Bell said. "The newspaper [Providence Journal] says they exhumed all three bodies, that is, Mercy's mother, her sister who had died before her, and Mercy. Everett said they only dug up Mercy. He implied that there was some sign that Mercy was the one ~ that's the supernatural creeping into his story. Everett said that after they had dug her up, [they saw that] she had turned over in the grave ~ but there's no mention of that in the newspaper or the eyewitness accounts."

We do not know exactly what position Mercy Brown's body was in on that day in March when George Brown, and some of his friends and family, came to examine Mercy's body. We do know that she looked "too well preserved."

"There's a suggestion in the newspaper that she wasn't actually interred in the ground," Dr Bell said. "She was actually put in an above-ground crypt, because bodies were stored in the wintertime when the ground was frozen and they couldn't really dig. When the thaw came, they would bury them. So it's possible that she wasn't even really interred."

Her visual condition prompted the group to cut open her chest cavity and examine her innards. Dr Bell said: "They examined her organs. The newspaper said her heart and liver had blood in it. It was liquid blood, which they interpreted as fresh blood."

The liquid blood was taken as evidence that Mercy was indeed a vampire and the one draining the life from Edwin and possibly other consumption victims in the community.

Dr Bell said: "They cut her heart out, and as Everett said, they burned it on a nearby rock. Then according to the newspaper, they fed them [the ashes of the heart] to Edwin."

Folklore claims that destroying the heart of a vampire would kill it, and by consuming the remains of the vampire's heart ~ the spell would be broken and the victim would get well.

The community's vampire slaying had failed to save Edwin ~ he died two months later, but maybe it helped others in the community?

Mercy Lena Brown is arguably North America's most famous vampire because she is also the most recent. The event caused such a stir in 1892 because newspapers like the Providence Journal editorialised that the idea of exhuming a body to burn the heart is completely barbaric in those modern times.

Dr Bell commented: "Folklore always has an answer ~ it may not be the scientifically valid answer, but sometimes it's better to have any answer than none at all."