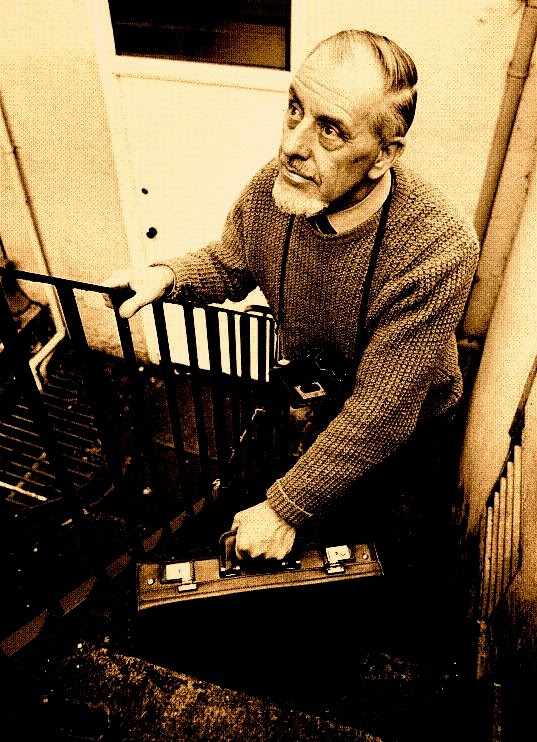 Peter Underwood was born in Letchworth Garden City, Hertfordshire, lived for much of his life in a small Hampshire village, and finally resided in Surrey. President of The Ghost Club since 1960, and a long-standing member of the Society of Psychical Research, Peter first entered the Vampire Research Society in 1973, having established a lively correspondence with myself wherein his support was unequivocal.

His colleague, Tom Perrott, had already invited me to address members of The Ghost Club in London. On 16 March 1973, Peter added: “We have a number of members who are deeply interested in the subject of vampires and I feel sure you would find our members kindly, sympathetic and friendly. I knew Montague Summers and members of The Ghost Club include Eric Maple and Robert Aickman who has written some excellent vampire stories. I hope that we may meet one day.”  In 1974, Peter took part in Daniel Farson’s television documentary on the subject of vampires and vampirism.

Peter kindly made me a Life-Member of The Ghost Club, whilst he, along with life-membership, was to become a Fellow Associate of the Vampire Research Society. Peter was already a member of the British Occult Society, an organisation that investigated the paranormal and occult phenomena, which was formally dissolved on 8 August 1988. The following year witnessed my collaboration with Peter on an anthology that would include the first published account of events in the early days of the Highgate Vampire case. On 14 October 1974, Peter wrote: “I am pleased to be able to advise you that I have now passed the proofs and I am very pleased with the way the book has turned out. It will be entitled The Vampire’s Bedside Companion and is due for publication early in 1975 [by Leslie Frewin Books].”

On 25 July 1975, Peter wrote: “As you know, I possess a medallion, given to me by Montague Summers, that is reputed to have power over vampires. … I am just wondering whether you happen to know of a current vampire infestation where [the medallion] might be tried [and tested]?”

The Highgate Vampire had been exorcised a year and a half earlier, but there were other vampires awaiting discovery. Thus began a comradeship in the field of vampirology that would endure to the sad news this month of my dear friend's death. On 15 December 1985, I was invited to give a piano recital of my own compositions on the occasion of Peter’s quarter of a century service as president of the The Ghost Club, at Berkeley Square, London. Other well-wishers included Dennis Wheatley, Vincent Price, Patrick Moore, Michael Bentine, Sir Alec Guiness and Dame Barbara Cartland — all of whom have now sadly passed on.

In 1990, Peter Underwood retold the events of the Highgate Vampire case (up to the first discovery of the undead tomb in Highgate Cemetery) in his book Exorcism! He commented in chapter six: “The Hon Ralph Shirley told me in the 1940s that he had studied the subject in some depth, sifted through the evidence and concluded that vampirism was by no means as dead as many people supposed; more likely, he thought, the facts were concealed. … My old friend Montague Summers has, to his own satisfaction, at least, traced back ‘the dark tradition of the vampire’ until it is ‘lost amid the ages of a dateless antiquity’.”

In his earlier book, containing the chapter with photographic evidence from the archive of the Vampire Research Society, written and contributed with Peter's encouragement by myself, he wrote: “Alleged sightings of a vampire-like creature — a grey spectre — lurking among the graves and tombstones have resulted in many vampire hunts. … In 1968, I heard first-hand evidence of such a sighting and my informant maintained that he and his companion had secreted themselves in one of the vaults and watched a dark figure flit among the catacombs and disappear into a huge vault from which the vampire … did not reappear. Subsequent search revealed no trace inside the vault but I was told that a trail of drops of blood stopped at an area of massive coffins which could have hidden a dozen vampires.”

And so our history in this arcane field progressed. We corresponded regularly and I was invited on various occasions to become involved in various projects. What struck me always was Peter's dedication to his work and loyalty to me. He wrote a Foreword to my novel Carmel at the turn of the century which included these words: "Memories crowded in: [the author's] commanding lectures and television appearances; his ready and valuable co-operation in literary labours of love; his admiration of mutual friends such as Montague Summers, Dennis Wheatley and Devendra P Varma; his dealing with not always complimentary publicity; his piano playing and musical compositions; his abiding interest in unearthly subjects and his enduring publications — the list goes on and on."

Such was the generosity of spirit incumbent in Peter Underwood who ended his introduction to this author with the following:

"And as the shadows lengthen ... I often think, in the words he sometimes used to close his letters: 'Until we meet again ...' "

Peter's first and last acts in our long friendship was to offer me his unconditional support. And he knew I always offered mine. There were times after the death in 2003 of his wife, Joyce (whom I had met in the previous century and he had married on the day I was born), when Peter reached out to me in the full knowledge I would console, counsel and completely support him where others might have been less willing because of what transpired in the aftermath regarding his personal life. Such friendship, trust and loyalty between two people is rare in today's modern world, and we each recognised, understood and valued what comprised an archetypal English gentleman. Peter, indeed, was quintessentially an English gentleman. That is how I shall always remember him. Well-attired, upright, kind, considerate, polite and punctilious. A lovely, lovely man.

I have lost one of my closest colleagues and beloved friends. My condolences are extended to Peter's family, friends and colleagues. When he parted company with The Ghost Club in 1993 and formed the Ghost Club Society, one of the first things he did was to make me an honorary life-member.

Thank you for everything, Peter. I shall for ever hold you in my thoughts and prayers.