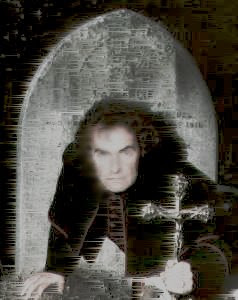 .
Seán Manchester has given his final interview on the Highgate Vampire case. He spoke for over two hours as three cameras recorded the historic occasion for posterity on the forty-first anniversary of the time he first brought to public attention the existence of a contagion at Highgate Cemetery. The Hampstead & Highgate Express, 27 February 1970, filled its front page with his startling revelations, albeit misquoting him and misrepresenting another exorcist, Reverend Christopher Neil-Smith, in their article written by editor Gerald Isaaman. Since then Seán Manchester has contributed to literally hundreds of interviews and television documentaries about his mysterious investigations spanning a period of no less than thirteen years. Now he feels that everything there is to say about the case has been said. He finds himself answering the same questions he was being asked four decades ago, and while Seán Manchester fully understands the enduring fascination the case holds (he wrote his book about his experiences to satisfy this need) the time has now come to draw a line under the topic. He believes enough is enough and wants no longer to talk about it. 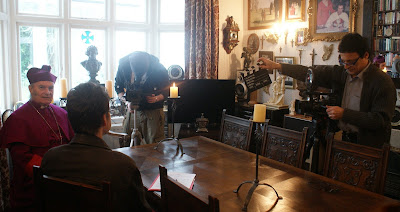 In an opening chapter of The Highgate Vampire back in the previous century he wrote:
“The reality I once experienced exists no longer and although its memories are the most potent that I possess, they now seem so far away ─ possibly because next to the hunger to experience a thing, there is no stronger hunger than to forget.”
.
Vampire enthusiast Kev Demant jumped the gun by two decades with his "Last Highgate Vampire Interview" in Udolpho magazine in 1992. He conducted his interview with Seán Manchester, who was gradually persuaded and hesitatingly consented, in writing. Seán Manchester's schedule prevented a face to face interview, which obliged Demant to ask questions on the magazine editor’s behalf via correspondence and the bishop answering them through the same medium.
.
“This is certainly a strange way of conducting an interview,” Demant wrote on 20 February 1992. “Jennie sets the questions, you do all the hard work and I get my name to the results! … I hope I can do you justice.” A week later, having received Bishop Seán Manchester's answers, he replied: “You have not balked at the more ‘difficult’ questions.”
.
When he saw Jennie Gray’s expurgated outcome in print, however, Kev Demant was somewhat less enthusiastic when he wrote on 27 February 1992:
.
“To be honest, I don’t know what to feel about the article, a somewhat sanitised version of the material submitted. Many of your responses have been truncated while my own contribution has been edited, certain sentences have been rewritten (badly in my opinion and without my consent) and ultimately censored. … I wonder what all these aesthetes, decadents, intellectuals and yuppies who constitute the readership are going to make of it all!”
.
It did not take long to discover what they made of it all. Within a month all six hundred copies sold out. Publishing editor Jennie Gray ordered an unprecedented extra hundred copies. Her now defunct specialist magazine had reached its peak at this point. On December 14th, Kev Demant wrote to Seán Manchester:
.
“Somehow I think it is your prestigious interview which had much to do with the favourable response.”
.
The final interview would actually take place many years later in the following century. Seán Manchester is introduced in the television documentary as "Britain's top exorcist." It can be viewed at 8.00pm Pacific time / 11.00pm Eastern Time on The Conspiracy Show (Vision TV, Canada) on 1 April 20011. Also included in the programme are Rosemary Ellen Guiley, Joe Nickell and Neil Arnold.
.
He will still continue to make broadcast contributions where it is in the public interest or where an opportunity to address an injustice arises. He will not, however, be willing to contribute any further media interviews about the Highgate Vampire case he investigated and resolved many years ago. 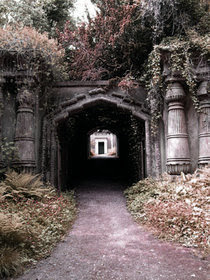