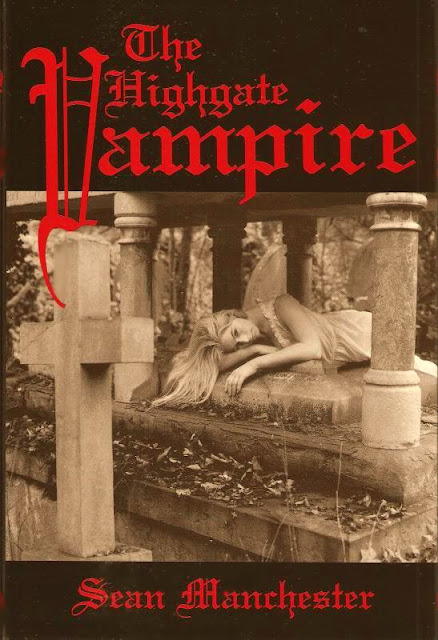 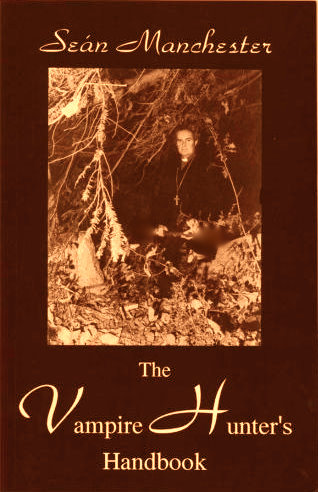 Seán Manchester (Author)
Publisher: Gothic Press (1997)
"This book is not about fictional vampires of the Bram Stoker’s Dracula genre, but real life blood sucking monsters. It should also be pointed out that there is a long tradition of people who hunt down and kill vampires. This book is not for the faint-hearted, or those people who live alone in rambling houses located on deserted moors." — Shaun Marin (Encounters magazine)

"Seán Manchester is, unsurprisingly, very well read in both classical and more recent sources on vampires and vampirism, and cites them with great authority while taking the reader through a brief tour of vampire lore and mythology. This is a book I’d recommend to anybody with an interest in the author or vampires. The parts which deal with vampires are obviously based on years of substantial research and personal experience." — Joe McNally (Fortean Times magazine)

The vampire has been defined down the ages as an accursed body which cannot rest in the kindly earth, but nightly leaves its grave to prey on sleeping men and women through whom they are believed to maintain a semblance of life by sucking thence the warm blood of such victims while they sleep. Sir James Frazer in the second volume of his work The Fear of the Dead in Primitive Religions (1934) is in no doubt that vampires are “malicious ghosts who issue from their graves to suck the blood of the living, and stringent measures are deemed necessary to hinder or arrest this horrible proceeding.”

They are, of course, demonic. In certain circumstances (though these are few and far between) those who expire from the parasitic undead's visitations and quaffing of their life-blood will themselves be at risk of becoming undead in their turn. This does not occur where the person is in a state of grace; where any mortal sin that stains their soul has been absolved. And by no means are the great majority of victims destined to return as undead. It would seem that those who become undead in this way are fewer than might be imagined. This nevertheless remains an enigma where probable candidates are those who have led a life of more than ordinary immorality and unbridled wickedness; where the individual has possessed a surfeit of selfish passions, evil ambitions and cruelty. Such undead, however, are thought to be those who have delighted in blood and devoted themselves during their life to the practice of diabolism and the black arts. Thus an undead is more likely to result from exceedingly base and cruel actions; especially where devil worship and devotion to the black arts has occurred.

The supernatural agency is demonic and, whilst human beings cannot actually transform into demons themselves, they may be possessed by them, and thus appear transformed. In the case of contamination followed by expiry of a candidate there exists the possibility that their malevolence sets in action forces which might prove powerful for terror and destruction even beyond the grave. It is hardly to be supposed that such persons would rest undisturbed while it is less difficult to contemplate the existence of this hideous life in death where the demonic is extant and seemingly manifests itself as a corporeal form. The smallest drop of blood can be employed by a demonic entity, enabling the wraith to form in a tangible manner. Such revenants are attracted to blood which allows them to effect their purpose. The ancient Israelites would not eat the blood of any flesh at all, because the life of the flesh is in the blood. The Hebrew word that translates as “life” in Deuteronomy 12: 23 (“Only be sure not to eat the blood, for the blood is the life”) also signifies “soul.”

The undead partakes of the dark nature and mysterious qualities of both revenant and demon. The exorcist must always be mindful of these alarming characteristics - not least the undead's terrible blood lust — and must never go unprotected when putting himself at risk during operative field work. Manifestation via the blood is the undead’s means of metamorphosis into a form often indistiguishable from a corpse. Since the undead do not exist in time — they dwell in what is described as "anti-time" - they will cast no shadow, nor will their reflection be seen in a mirror or water’s surface. The crucifix symbol itself is utterly abhorred by them, and indeed all forms of evil. The object and what it is made of does not possess any power, yet it is so strongly symbolic of the triumph of good over evil that it alone repels evil and whatever is an emissary of evil. However, when employed by a person the intent and faith of the person employing it is paramount. This might seem like a paradox. Christian items and holy places utterly repel evil people who oftentimes delight in their sacrilege. Likewise supernatural evil shuns these holy items.

It is indubitably unwise for these sacred symbols to be adopted as mere fashion accesories. Similarly, of course, it is unwise in the extreme for diabolical symbols to be adopted and worn. So the power of the crucifix exists, but will be magnified one thousandfold when supported by faith. Exorcism does not "kill" the demonic agent. It rids our sphere or dimension of the supernatural predatory wraith. The corporeal host once exorcised obviously returns to its true state and is no longer plagued by the apparent supernatural ability to manifest as though it were living.

“Whether we are justified in supposing that cases of vampirism are less frequent today than in past centuries, I am far from certain. But one thing is plain — not that they do not occur, but that they are carefully hushed up and stifled.” — Montague Summers (The Vampire in Europe, 1929).﻿
.
Posted by Vampirologist at 22:22

.
Seán Manchester - Cimitero di Highgate (Storia di un Vampiro)
www.youtube.com
An alarmingly abridged version of BBC television's 24 Hours programme has been uploaded onto YouTube by David Farrant. It reveals the bandwagoneer contradicting virtually everything he nowadays claims about his arrest at Highgate Cemetery while he was prowling amongst the tombs on the night of 17 August 1970 and exposes him as a revisionist at best and a liar at worst, but such is his addiction to publicity that anything which includes him is apparently suitable for dissemination. The bulk of the original programme focussed, of course, on Seán Manchester's investigation into the mysterious case of the Highgate Vampire at its inception. Farrant obviously does not want anyone seeing this material and has therefore deleted all the footage where Seán Manchester features and indeed all reference to the British Occult Society, an organisation to which Farrant owed absolutely no connection whatsoever despite his false claim to the contrary in the years which followed. Some of the material showing Seán Manchester deleted by Farrant appears above in the Italian language version of a Discovery Channel programme's inclusion of the original 1970 television footage. David Farrant's highly selective version of the programme appears below.
.
http://www.youtube.com/watch?v=-VcUq-ohXVY
. 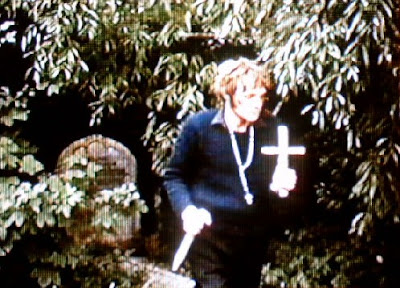